How Companies Can Lead Climate Action 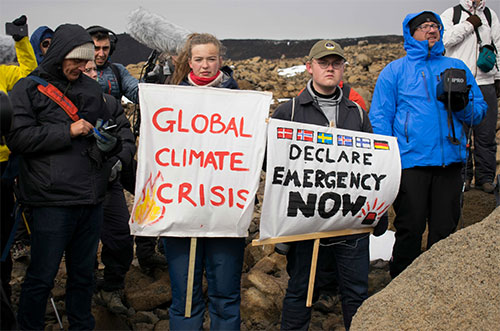 Click here to listen to this article as a podcast

Iceland just held a funeral for its first glacier lost to Climate Change. Dozens of people, including Iceland’s prime minister amongst other leaders, hiked to the site of the once-iconic Okjökull glacier, which was declared dead in 2014.  An urgent message on a plaque memorializes the frozen body, which once spanned 15 square miles but has since melted into a lake.

The planet is barreling toward 1.5 degrees of global warming as soon as 2030 unless we enact “unprecedented changes in all aspects of society,” a dire United Nations report warned in October. And it’s going to take more than switching to energy-efficient light bulbs.

According to a report by Onalytica, “climate solutions” trended 153% more in May 2019 compared to May 2018. Hot climate, hot topic. Some recent reports also indicate that global warming is accelerating a lot faster than we have been led to believe. It would appear that reality (along with carbon) is also being offset.  In an era of contradictions, uncertainty is our proverbial fossil fuel. The world needs faster, clearer, and actionable approaches to reverse the climate crisis. Fact.

This priority is evident in businesses and brands that are embracing the  UNs 17 Sustainable Development Goals as a roadmap toward better environmental and social governance (ESG)  business development and investment. Climate change is not just an environmental problem—it is a social problem that demands social innovation. Take the Swedish fintech company Doconomy, for example. This year-old company transforms credit cards into a platform to activate and educate shoppers. Integrated with an app which uses a calculation system to measure the CO2 produced with every transaction, the card connects the dots between purchases and their impact on the planet. The standard credit card also offers information on investment funds that have a positive effect on the earth, a free savings account, and financial rewards/refunds for “green” purchases. Their DO Black card has no premium benefits other than a carbon limit. Rather than stopping you from overspending because of available funds, the card prevents you from overspending on the levels of CO2 emissions caused by your consumption.

The company website points out that “for years, credit cards have put a limit on our credit. DO Black puts a limit on our impact,”. Also, no, this credit card is not “plastic”— bio-sourced material and ink made from recycled air pollution particles make this card that much more “green.”

4.8 million tons of plastic end up in the ocean each year according to “conservative estimates” by scientists. The most recent plastic statistics also show that 26 million tons get buried in landfills every year, here in the US. And China just stopped accepting plastic recycling from the United States and Canada. Good for them. There’s no denying that plastic is devastating our oceans and our ecosystem. However, recently scientists have found multiple ways to recycle, re-use or break plastic down, including a process that’s regarded as nearly impossible – turning it into jet fuel. The method uses energy that can be 100% recovered and is easily scalable.

With the Amazon burning away, we must continue to pay attention to how trees contribute to our ecological system. After a trip around the world in 2009, Christian Kroll saw the devastation of deforestation first-hand. It propelled him to develop a company that’s shifted people away from Google. A search engine with more than 8 million users, Ecosia uses 80% of its profits from advertising revenue to support tree-planting projects. So far it has funded more than 67 million trees. 10 years since its birth, the company is doing its part to cancel out a decade of global C02 emissions. The company supports full financial transparency, is CO2-Negative, and is certified by B-Lab as a benefit corporation.

Social innovation creates a thriving economy by providing sustainable resources. For instance, this Solar-powered desalination plant in Kenya gives fresh water to 25,000 people a day, and Ikea’s first store in India offers delivery by solar-powered rickshaws. When a company brings SDG 13 (Climate Action)  into their internal strategy and innovates, they drive the potential of their company, the planet, and people forward. SDG 13 is a multi-trillion-dollar opportunity. China, for example, is moving from being a follower to being a leader thanks to its R&D in green energy. According to a report, it is the most prominent location for renewable energy investment, accounting for more than 45% of the global total in 2017. China has set itself up to be a superpower by investing $367 billion in renewable power generation. Nations and companies using the UN’s 17 SDGs to drive social innovation and build a better, more sustainable economy recognize the opportunity to lead the future.

An economic model based on wealth concentration and resource extraction leave most of the world over-reliant on philanthropy and government. The engine of capitalism, fueled by social innovation and kept in check by the ever more conscious consumer, can help create scalable solutions to genuine market opportunities and deliver sustainable revenues. Therefore business and brands can (and ostensibly should) become the most powerful instruments for change the world has ever seen. Let’s hope so.