A lot has been written about the Super Bowl this past week. And even more has been spent. Each 30 second ad spot cost $5.6m.

Fox, (who’s inventory sold out in November) sold 82 ad units in total at 30 seconds each. That’s almost ½ billion dollars in media – let alone the cost of creative and production – which probably added another $50m or so.

My co-founder and I sat, bowl of chili in one hand and our cellphones in the other during the game tweeting out little cotton socks off because for every 30 second spot that aired, 27,000 students in the US could have received an education; childcare could have been provided for 5,600 low income families; 560 homeless could have been taken off the streets and 100m trees could have been planted. 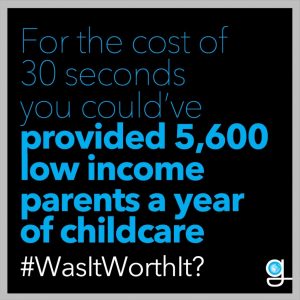 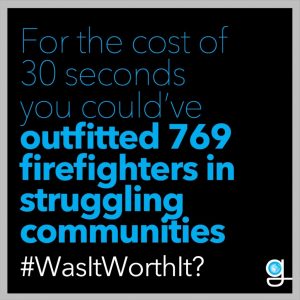 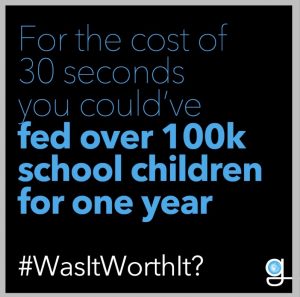 You see this isn’t about whether the ads were any good or not, or whether there was too much nostalgia, MC Hammering, Groundhogging or luxury shaming (although I guess we all got an insight into what Jeremy Clarkson’s electric wet dream in a Porsche might look like.. and I don’t know about you, but I’m still somewhat perplexed as to why Winona Ryder was left prostrate by the roadside in the Minnesota snow building a website.) Stranger things.

The point is that the return on investment – culturally, economically, socially or otherwise – just wasn’t there. It was a bit like turning up in Las Vegas with $459.2m in your back pocket, taking a few spins, losing it all over the course of 41 minutes and then putting it all down to a good time.

So let’s break this down:

With a captive audience of 102m people (skewing male) but still largely geo-demographically representative…that’s about 1/3rd of the US population. A good TV advertising campaign (according to Chief Marketer) should deliver a 300 and 500 percent ROI or a 3:1-5:1 return on investment. (The basic calculation is to divide the gross sales margin by the ad spend.) So, with a captive audience like this, we can safely assume that collectively – across all the brands that advertised during Super Bowl –  the amount of incremental sales generated amounted to at least $2.5bn.

Now, once you’ve got them, you need to keep ‘em right? And a good ratio for customer lifetime value (CLTV) is about 3:1, which takes us up to $7.5bn. This is all back of the Napkin stuff mind you, but you get the general gist. (If anyone has got access to Nielsen data and wants to run the numbers for me, I’d be very much obliged!)

So let’s say (for sake of argument), the brands who advertised during Super Bowl (making at least $7.5b between them) teamed up, got together and decided to contribute just 1% of their total sales revenue ($75m) by giving each NFL team player the opportunity to support a worthy cause of their choice. Everyone’s a winner.

It’s not actually about whether brands spending $5.6m every 30 seconds on advertising during Super Bowl was worth it. It’s about the wasted opportunity, given the tremendous resources and influence at their disposal during one of the biggest culturally inclusive and celebratory moments of the year. It’s about how a self-interested, myopic and fossilized view of marketing won the day and killed the potential for meaningful partnership, social enterprise and building a powerful community for positive change.

Did no-one in focus groups tell them that good is the new cool, social innovation is the new marketing and activism is the new sex? In a way that is exponentially more disruptive than digital ever was? Evidently not. So, the next time you see any of the brands who advertised during Super Bowl take a stand on social or environmental issues or make claims in their annual reports about living their purpose and using their business as a force for good, call bullshit.

Frankly, it just doesn’t wash. Whichever detergent you use.