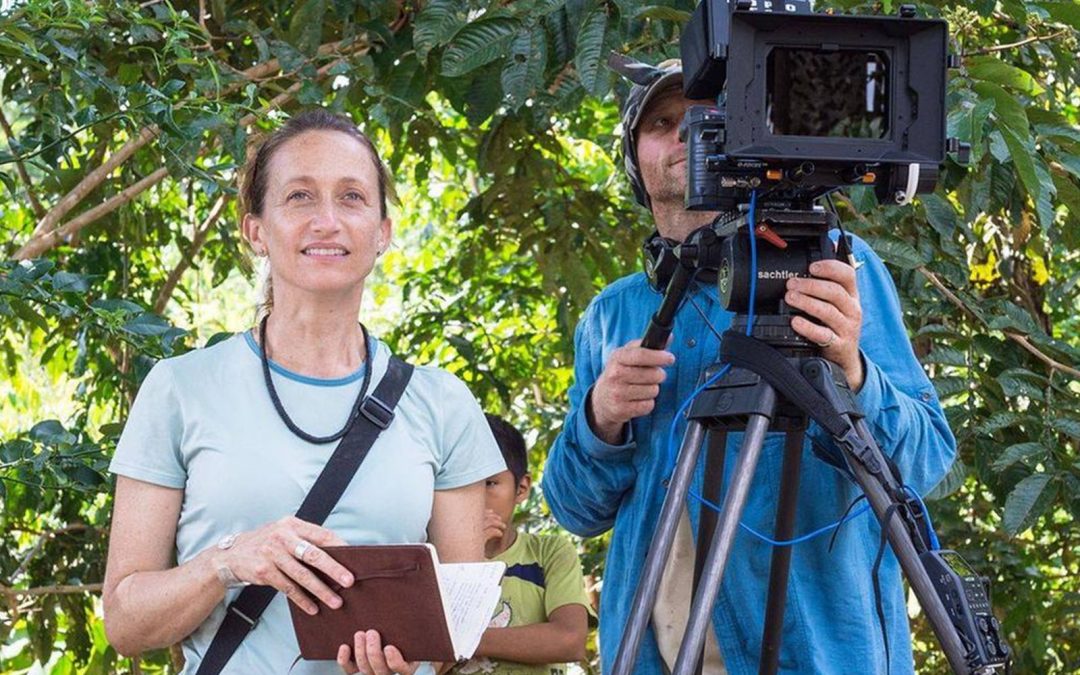 Discussing Indigenous Rights in the Amazon and Rainforest Preservation

Since time immemorial, Indigenous Peoples have been caretakers of the world’s rainforests. They make up 4% of the global population and yet they nurture 80% of the world’s biodiversity on their land. Where there is indigenous land there is no deforestation. And yet, when Jair Bolsonaro became president of Brazil at the beginning of this year he had already pledged that “If I become President there will no longer be a centimeter of indigenous land.”

Céline Cousteau, filmmaker, explorer, environmentalist, and granddaughter of Jacques Cousteau, is currently promoting her new documentary: “Tribes on the Edge,” which explores the ever-growing threat faced by the Javari, a collection of native tribes located in a largely western region of the Amazon rainforest.  But this film isn’t only devoted to the critical threats faced by the Javari – more so – how we as humans as a whole will all be affected by rainforest destruction. Their existence is threatened and their survival could be our own.‍‍

“Twenty percent of our oxygen comes from the Amazon.” Céline says, “That’s one in five breaths. So essentially, as the Amazon rainforest disappears, so does one of our critical oxygen sources. Therefore, rainforest preservation isn’t only for the benefit of the people and wildlife who live there, but human survival on this planet.‍The Indigenous of the Javari and the Amazon in general are the frontline guardians of that ecosystem by merely existing and being alive. They are protecting this rainforest on which we depend literally for the air that we breathe. And that is key to this documentary.  Educating the public on the Javari’s culture and relationship with the forest will help in its preservation.”‍

The Amazon rainforest spans 670 million hectares, and this biome stores 90-140 billion metric tons of carbon, a gas which if released, will only serve to contribute to global warming and exacerbate our present environmental problems.  If current deforestation rates continue it is estimated that by 2030, we will only have 10% of rainforest remaining. To put that in perspective, that would mean that 45% of the earth’s home to all plant life and wildlife would be destroyed.

“When it comes to the Javari we’re somewhat in a state of prevention in an Indigenous territory that is 85,000 square kilometers, the size of Portugal or in the United States almost the size of Maine. And there are about 7,000 indigenous people who live in Vale do Javari including the largest concentration of uncontacted peoples in the entire Amazon and some say the world,” Céline says.

Getting access to these tribes and villages is also a huge challenge. Working in the Amazon is complicated, and there are no accessible roads to use.  All travel is done by boat:

This means indigenous residents have little support from outside communities – which is becoming more and more a critical issue due to health concerns and encroaching illegal activities such as hunting, fishing, logging, and gold mining. Probably the most surprising discovery prior to the filming of the documentary was that the indigenous tribes have a 50-80% hepatitis infection rate (a disease that didn’t exist before contact with outsiders, starting with European invaders in the 16th century).

Some believe that Hepatitis came over the border from Peru. Others believe that it was deliberately spread by the Brazilian Government. Whether true or not, with disparities in access to healthcare, lack of prevention, and limited medical resources, the Indigenous of the Javari are vulnerable to this outbreak and entire communities are dying – along with their culture, rituals, philosophies and their ability to protect the rainforest. But Hepatitis is only one issue. Illegal activities are increasing and the government wants to weaken protection of indigenous land. If their land isn’t protected, neither are they.

“That knowledge of Hepatitis rates is what spurred me to want to do something more when I was first there in 2007. But the story is much bigger than that of course. Recent news is that the hepatitis issue has gotten a little bit better and that the next generation is being vaccinated more than previous ones. But the current generation has been told that they’re going to disappear.”

But in face of this adversity what is heartening according to Céline, is that the various Indigenous groups of the Javari stand together with commonality, abandoning inter-tribal rivalries to push back against persistent threats. Whether they’re illegal activities coming onto their territory, or the government who is completely undermining their human rights.

Elected in January of this year, Jair Bolsonaro has made it his mission to undermine and diminish Indigenous territories.  He has even vowed to transfer responsibility of indigenous territories to the ministry of agriculture during his first day of office, a move which is expected to be only one of many of his industrial development policies set for the Amazon which will occur at the expense of the rainforest. There has been intense and successful pushback of this move.

Beto Marubo, a member of the Marubo tribe and an organizer with the Union of the Indigenous Peoples of the Javari Valley attended a recent screening of Tribes on the Edge. When he was asked what ordinary people can do to help he simply said, “Walk out of this room and tell the story, because what happens there affects all of you.”

Additionally, supporting organizations that advocate for Indigenous rights is another method of confronting this issue. Supporting them is supporting rainforest protection itself. Tribes on the Edge is not just a film, it’s an impact campaign which includes three initiatives: Action, Communication, and Education. All donations made to the project help the people of the Javari. Brazilian based organizations devoted to native rights include FUNAI and IWGIA, both of which are eager to educate the public on critical issues facing communities in the Amazon.  Additionally, rainforest protection agencies like the World Wildlife Fund, the Rainforest Alliance, the Rainforest Trust, and Amazon Watch are active in promoting Amazonian conservation among other environmental issues.

In the end though, it will be governmental policy and critical action by corporations who benefit from farming, mining, and oil production in the region, that will ultimately change what happens in the Amazon. Avoiding purchase of palm oil, soy, and beef products sourced from deforested land and holding the companies that continue to do so accountable is one step we can all take in making a difference. Additionally, decisions by conscious institutions such as the American Museum of Natural History which recently canceled a gala devoted to Jair Bolsonaro himself, are examples of powerful statements that can make a difference.

We should also remember that while economic opportunities are the primary reason for rainforest destruction, the potential for medicine and pharmaceutical research are enormous and may even outweigh current mining and farming projects in the region.

“If these rainforests, if these ecosystems, with rich biodiversity disappear – so could our global potential future, health and medicine,” says Céline. “If we lose these ecosystems that provide these solutions well we lose our potential pharmacy.”

“I want people to wake up in the morning choosing to be optimistic. To choose every day to live a life with purpose, devoted to a cause. This is the way movements happen,” she says “it’s a domino effect of a good intention and purpose.”

Put simply, awareness leads people to adopt good intentions and take action, which in turn acts as an example for other individuals.

‍To learn more about Tribes on the Edge, Céline’s work and other ways to get involved please visit her website. To see the film trailer, click on this link